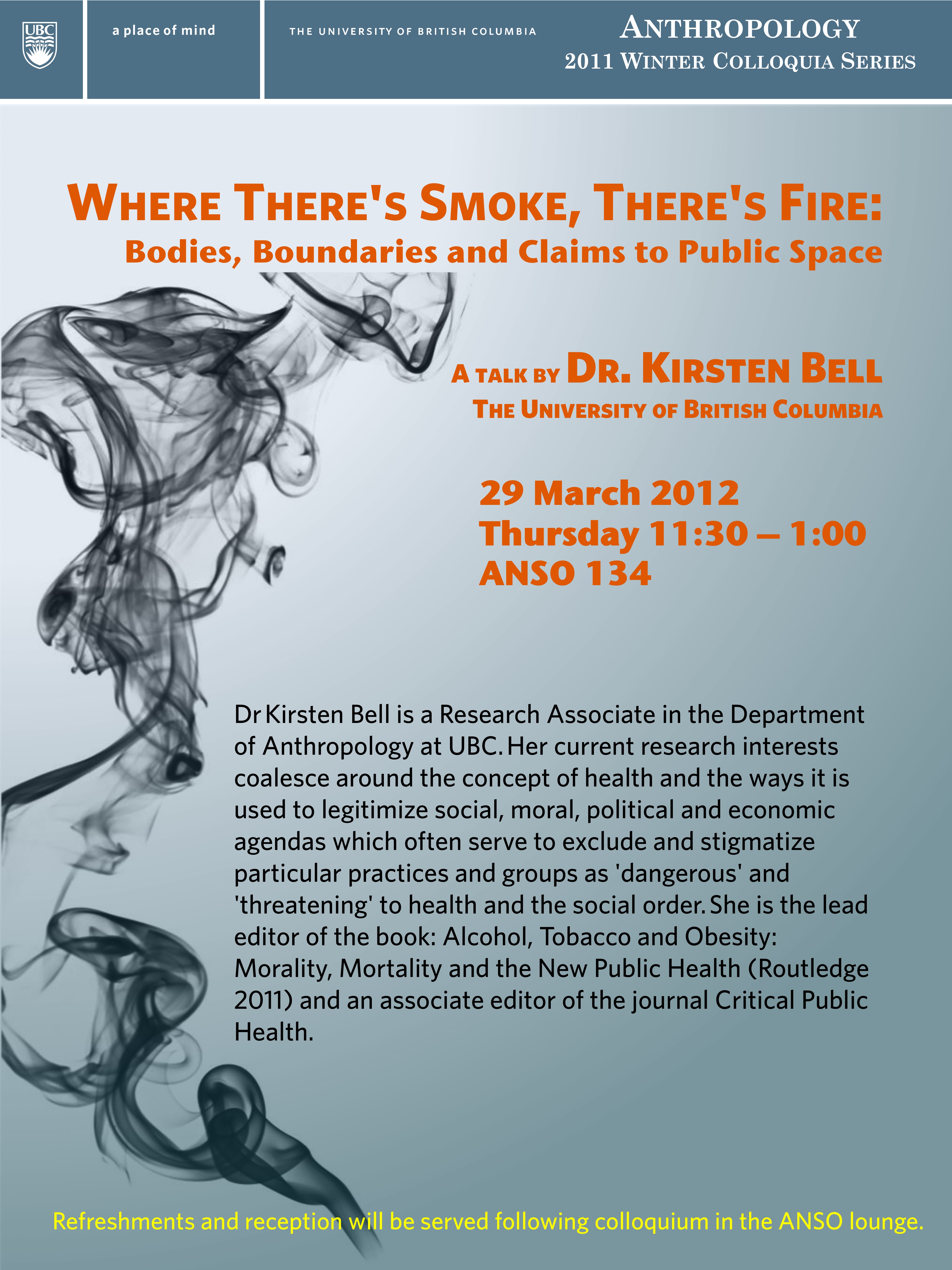 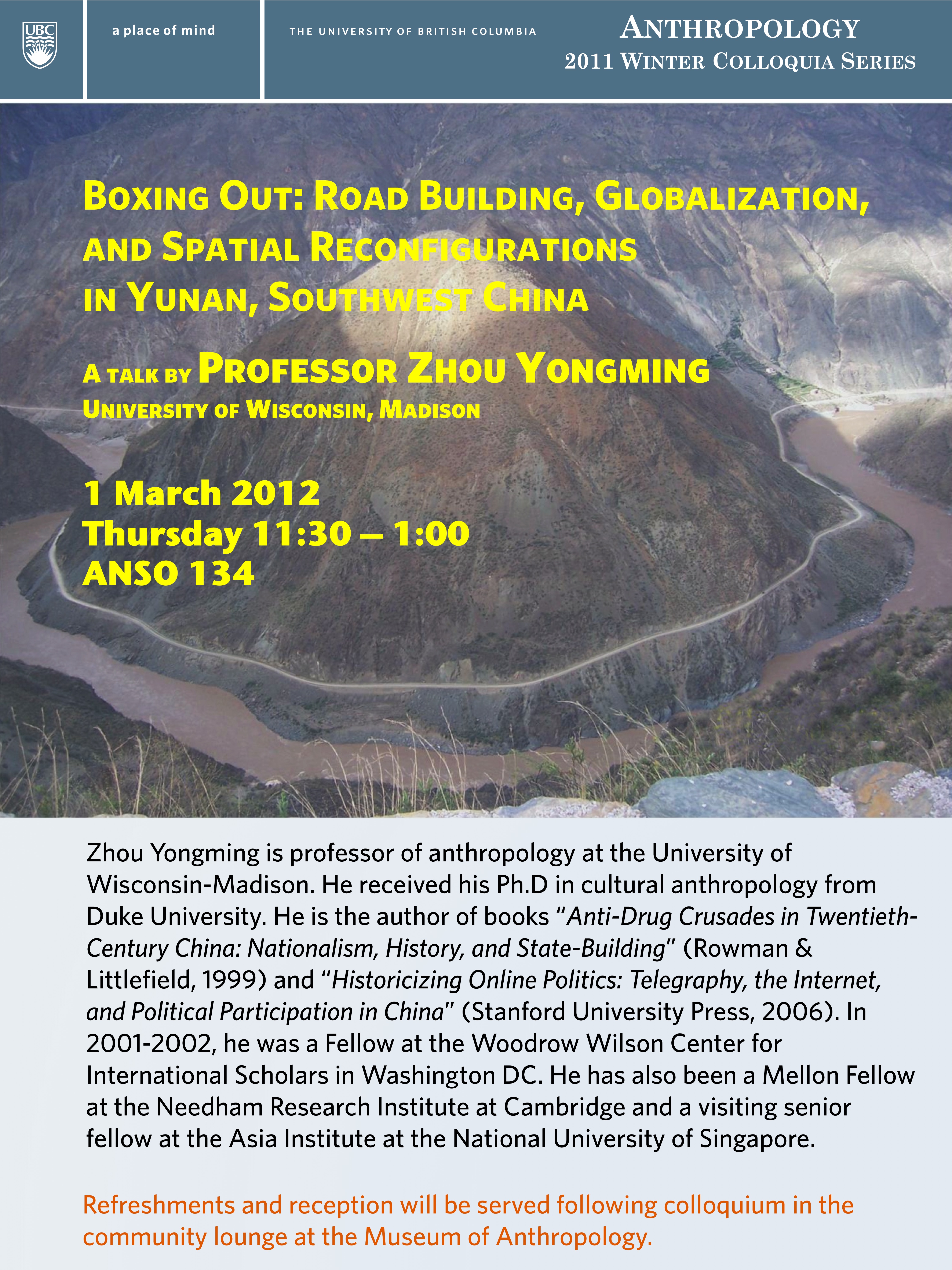 February 16, 2012, 'Death in the Pyramids: The Isotopic Anthropology of Sacrifice at Teotihuacan'

Death in the Pyramids: The Isotopic Anthropology of Sacrifice at Teotihuacan 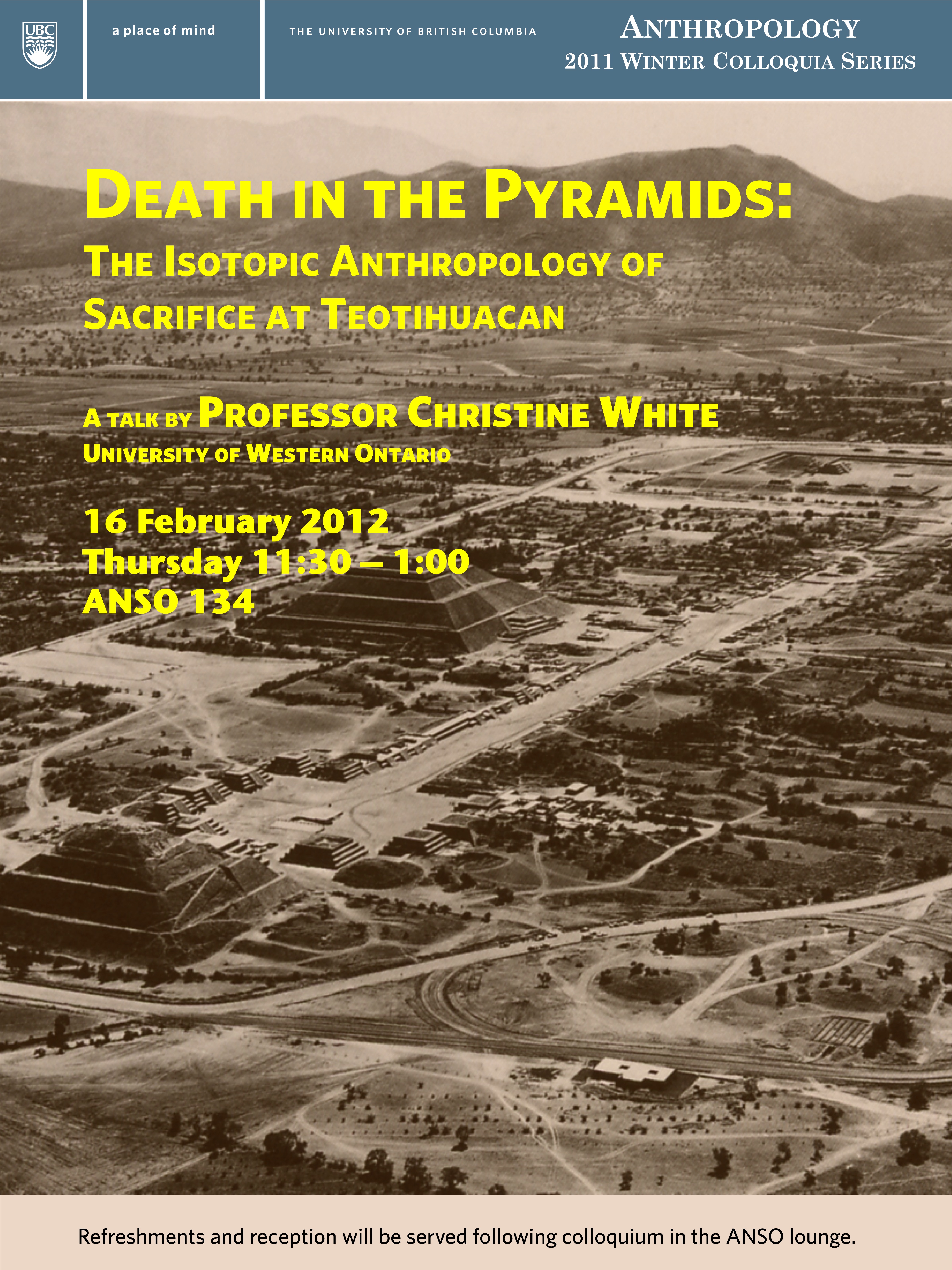 Seals and hunters on Lake Baikal in Siberia 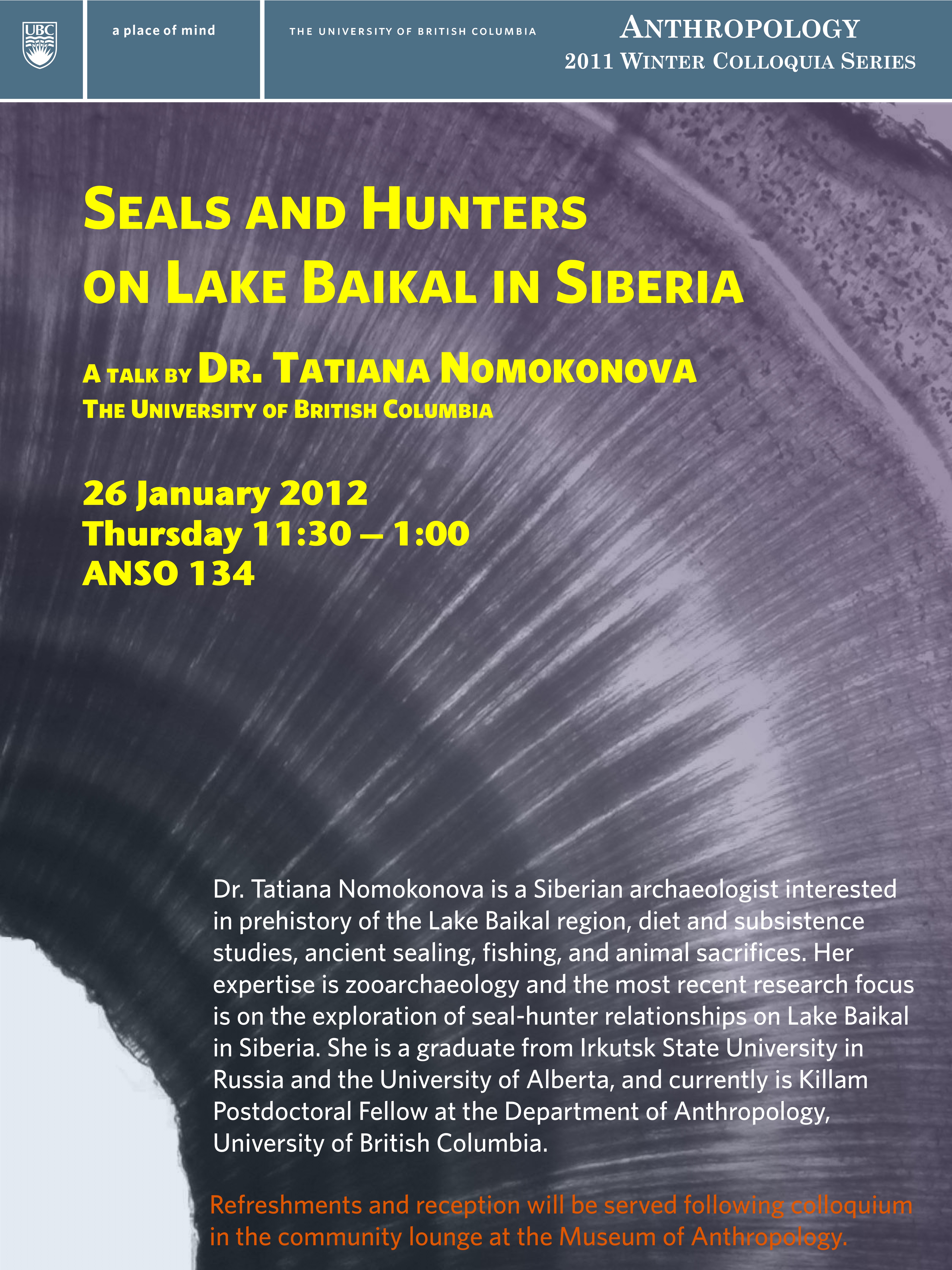 Abstract:
Sealing on Siberia's Lake Baikal was carried out by several hunter-gatherer and pastoralist groups throughout the Holocene, and small-scale hunting of these animals is still conducted here by indigenous populations. Bones of Baikal seals are commonly found during excavations of the region's habitation sites but also are seen in ‘ritual’ stone features, caves, human burials, and in rock art, suggesting an important role of these animals in local diets, subsistence practices, and worldviews. Dr. Nomokonova’s talk is based on her recent ethnoarchaeological and zooarchaeological studies in the Lake Baikal region.

12th January, Thursday, 11:30 - 1:00pm, ANSO 134
Professor Madonna L. Moss, University of Oregon
Northwest Coast: Archaeology as Deep History - A Discussion
Archaeologists typically classify Northwest Coast societies as "complex hunter-gatherers," and invoke them as exemplars for prehistoric and historic societies such as the Calusa, Jomon, and Natufians. The Northwest Coast is seen as representative of "middle-range" societies of the last 12,000 years of human history around the world. Simultaneously, the Northwest Coast is often characterized as anomalous because complex social forms, such as hereditary inequality, slavery, and elaborate ceremonialism, evolved in the absence of agriculture.
This open discussion-based presentation will provide perspective on the concept of ‘hunter-gatherers’ on the Northwest Coast and discuss recent research throughout the coast.

September 8, 2011, 'BETWEEN INDIGENEITY AND NATIONALITY: THE POLITICS OF CULTURE AND NATURE IN RUSSIA'S DIAMOND PROVINCE'

This presentation is sponsored by the Ethnographic Film Unit at UBC and the Department of Anthropology in collaboration with Green College and the Museum of Anthropology.

November 3, 2011, 'CHANGING PERSPECTIVES OF THE INDUS CIVILIZATION: RECENT DISCOVERIES IN PAKISTAN AND INDIA'

November 7, 2011, 'Stone Bead Making from the Indus to Chiba: Comparative and Experimental Studies'

This presentation is sponsored by the Depts. of Anthropology and the Asian Studies.

January 20, 2011, 'Global Health Business: The Production and Work of Health Statistics in Sierra Leone and Germany'

The global push for health statistics and electronic digital health information systems is about more than tracking disease prevalence. It is also experienced on the ground as means to develop and maintain particular forms of global knowledge, decision- and profit-making that are not innocent. "The numbers" make possible actuarial and audit logics that undergird the management of health at a distance and which are increasingly necessary to neoliberal healthcare schematics. In this colloquium, we discuss how health statistics operate as transnational artifacts in the business of global health. Ethnographic and descriptive data from two very different countries, Sierra Leone and Germany, show how statistics simultaneously are produced and produce the business of global health. In both cases, numbers are not quite what they seem, and shape and are shaped by social, political, and economic contexts. Health statistics are shown to be inextricable from their social milieus, despite operating in global health as if they are freely formed and objective. The talk is based on living and working in Sierra Leone for two years, and anthropological fieldwork in hospitals and other places in Germany over a ten year period.

After decades of being the most accessible method of fertility control, abortion is becoming contentious in post-Soviet Russia in the context of religious revival and publicized concern over a national “demographic crisis.” Based on fieldwork at a Russian Orthodox pregnancy consultation center in St. Petersburg, this paper explores how reframing past actions in the idiom of sin becomes a source of moral authority in post-Soviet appropriations of transnational pro-life activism. Since a majority of the pension-aged women who make up the bulk of Russian Orthodox churchgoers have had several abortions during their reproductive lifespans, anti-abortion activism is often a form of penance for past abortions. As female activists present themselves as virtuous mothers and grandmothers who are also grave sinners, Orthodox Christian teachings about sin and penitence combine with psychological debates about “post-abortion syndrome” to create a circumscribed space of gendered moral agency. While women in Russia generally have fewer opportunities than men to derive authority from the ability to confront moral ambiguity, demographic concerns make reproduction and childraising a sphere where women’s fraught decisions gain public weight. At a time when Russian citizens are rarely encouraged to think critically about their Soviet past, practices of confession and penance at once demand and contain critical memory, making moral ambiguity useable for political life by reducing it to a tolerable level.

Neandertals were the first fossil hominins discovered and, since then, have been the most studied.However, it is only in the last two decades that entirely new techniques have made fascinating insights into their biology and behavior possible. Beyond their odd anatomy, we are now able to explore the mechanisms of their birth and growth or the way their brains developed. The decoding of their genome has opened a new era in Paleoanthropology. The debates surrounding the Neandertals are captivating because they are so close and so different from us. Ultimately, understanding the rise and the fall of the Neandertals will help us to elucidate the unrivaled evolutionary success of our own species.

Telling Tales of Migrant Workers: Religion, Activism, and Women's Narratives
Professor Constable’s visit is organized by the Border Crossings Consortium, and co-sponsored by the Liu Center for Global Issues and the Departments of Anthropology, Geography, and Sociology.

March 3, 2011, 'Stranger-Kings, Enemy Heads, Affinal Kin, and Other Foreign Riches: The Alterity of Power and Vice-Versa'

Stranger-Kings, Enemy Heads, Affinal Kin, and Other Foreign Riches: The Alterity of Power and Vice-Versa
Since the eighteenth century, anthropology has been implicated in a major theoretical scandal. Although the world over, local societies have been culturally fashioned through their interdependent engagements with near and distant others, anthropological paradigms of every variety--whether functionalist, Marxist, evolutionary or structuralist--have supposed that cultures are self-fashioned through one or another internal dynamic. Rather than taking cultures as sui generis, this lecture focuses in intercultural relations of order and change, with special attention to the planetary distribution of stranger-king formations as one among several such phenomena of the alterity of power--and the power of alterity.

Only Apes Have "Human Nature”
For more than two millenia we in the West have been haunted by the spectre of our own inner being : an apparition of human nature so avaricious and contentious that unless it is somehow governed it will reduce society to anarchy. I claim this is a specifically Western nightmare, for it supposes an opposition of culture and nature that is distinctive of our own folklore and our native Social Science-and contrastive to the many peoples who consider beasts are basically human rather than humans are basically beasts. Indeed it is not even true of our kinship relations which, like those of other societies the world over, involve mutualities of being and belonging that entail intersubjective commonalities of experience and interest beyond all sense of individual self concern. Kinsmen are people who live each other's lives and die each other's deaths. Recent experiments show that the roots of this symbolic capacity of mutuality already exist in infants of nine to 12 months-- but are unknown to great apes, who rather singularly concerned with their own existence.