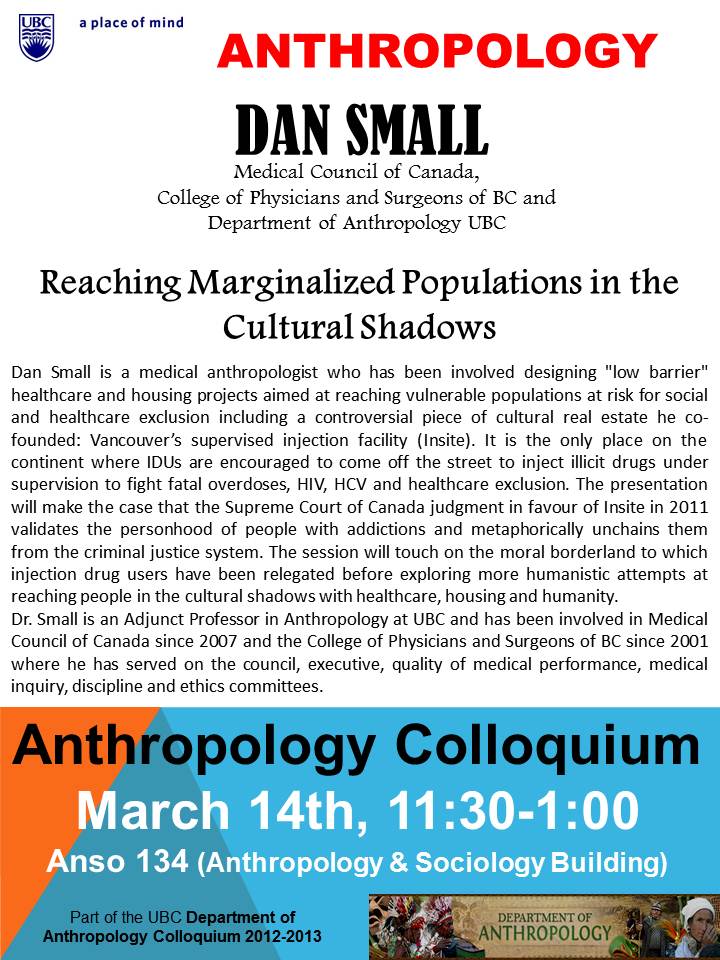 Medical Council of Canada,
College of Physicians and Surgeons of BC and
Department of Anthropology UBC

Dan Small is a medical anthropologist who has been involved designing "low barrier" healthcare and housing projects aimed at reaching vulnerable populations at risk for social and healthcare exclusion including a controversial piece of cultural real estate he co-founded: Vancouver’s supervised injection facility (Insite). It is the only place on the continent where IDUs are encouraged to come off the street to inject illicit drugs under supervision to fight fatal overdoses, HIV, HCV and healthcare exclusion. The presentation will make the case that the Supreme Court of Canada judgment in favour of Insite in 2011 validates the personhood of people with addictions and metaphorically unchains them from the criminal justice system. The session will touch on the moral borderland to which injection drug users have been relegated before exploring more humanistic attempts at reaching people in the cultural shadows with healthcare, housing and humanity.

Dr. Small is an Adjunct Professor in Anthropology at UBC and has been involved in Medical Council of Canada since 2007 and the College of Physicians and Surgeons of BC since 2001 where he has served on the council, executive, quality of medical performance, medical inquiry, discipline and ethics committees. 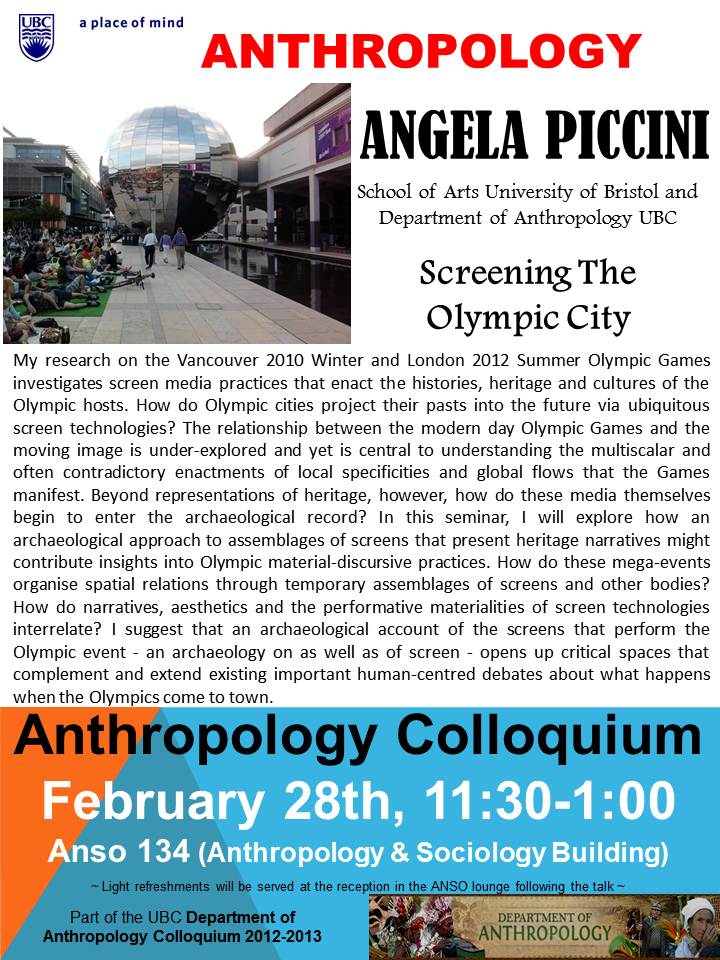 School of Arts University of Bristol and
Department of Anthropology UBC

My research on the Vancouver 2010 Winter and London 2012 Summer Olympic Games investigates screen media practices that enact the histories, heritage and cultures of the Olympic hosts. How do Olympic cities project their pasts into the future via ubiquitous screen technologies? The relationship between the modern day Olympic Games and the moving image is under-explored and yet is central to understanding the multiscalar and often contradictory enactments of local specificities and global flows that the Games manifest. Beyond representations of heritage, however, how do these media themselves begin to enter the archaeological record? In this seminar, I will explore how an archaeological approach to assemblages of screens that present heritage narratives might contribute insights into Olympic material-discursive practices. How do these mega-events organise spatial relations through temporary assemblages of screens and other bodies? How do narratives, aesthetics and the performative materialities of screen technologies interrelate? I suggest that an archaeological account of the screens that perform the Olympic event - an archaeology on as well as of screen - opens up critical spaces that complement and extend existing important human-centred debates about what happens when the Olympics come to town.

January 31, 2013, 'Onerous Ancestry: Researches Toward Being on the Right Side of History.'

Onerous Ancestry: Researches Toward Being on the Right Side of History.

This talk discusses the collaborative processes involved in a research and writing project initiated by members of the Kwagu’ł Gixsam clan of the Kwakwaka’wakw First Nation. Together, we produced an ethnographic history focused on the life of their female ancestor Ga’axsta’las / Jane Constance Cook (1870-1951). She was a high-ranked woman who was a cultural mediator; a devout Christian; a leader and activist for land claims, fishing, resource and citizenship rights, and adequate health care. Our work challenges dominant scholarly narratives that misrepresent her motivations for criticizing customary practices and eventually supporting the colonial ban on the potlatch. Her criticism was grounded in advocacy for the material needs of women and children in the context of shifting marriage practices. Ga’axsta’las’s descendants tell her story through larger lineage histories; through co-analyses of the archival traces she left; and through oral histories about her presence in their lives. The anthropological canon and the colonial archive constitute significant memory genres in our production of history. By documenting her story, her descendants seek to reconcile stigma linked to their ancestor’s actions and to forge a positive cultural identity for the youngest generations. Contemporary forms of potlatching and feasting are approached as intentional sites of social memory that illuminate an under-discussed chapter on the upheaval of the colonial potlatch, an understanding deemed highly relevant to the needs of the present. Represented as neither victim nor resistance hero in this revisionist history, the story of Ga’axsta’las poses questions about research and publication in community contexts where internal colonial debate is unresolved.

January 17, 2013, 'The ICT revolution comes to Melanesia: connectivity and mobile phone use in Papua New Guinea'

The ICT revolution comes to Melanesia: connectivity and mobile phone use in Papua New Guinea 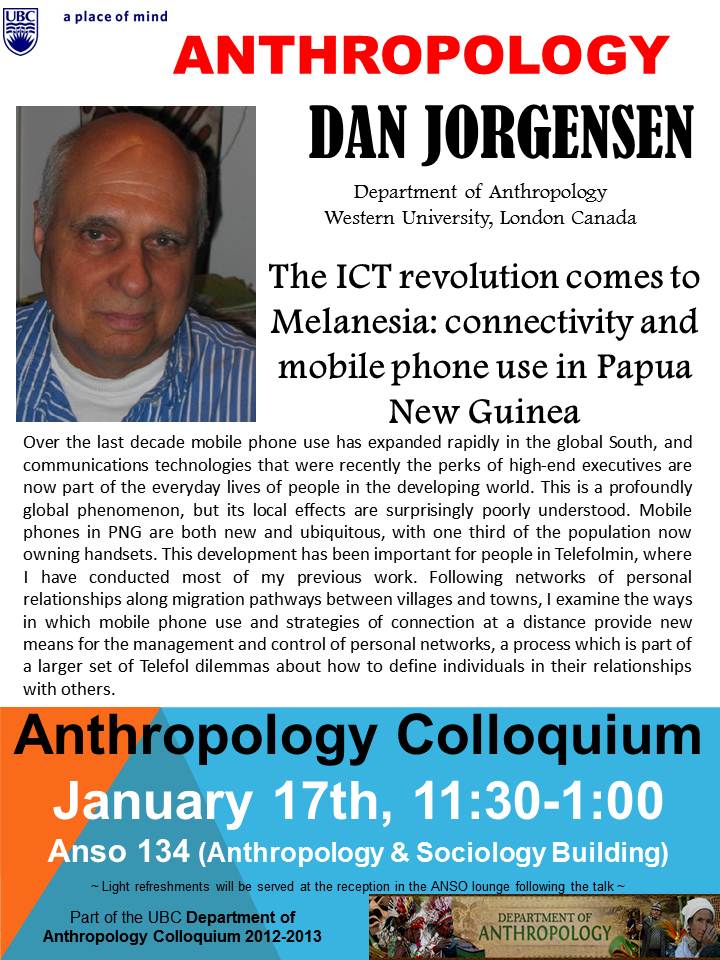 Over the last decade mobile phone connectivity has expanded rapidly in the global South, and communications technologies that were recently the perks of high-end executives are now part of the everyday lives of people in the developing world. This is a profoundly global phenomenon, but its local effects are surprisingly poorly understood. In this paper I examine the spread of digital connectivity in Papua New Guinea with an eye to understanding the specificities of mobile phone use. PNG’s mainly poor rural population is spread over difficult terrain, with little infrastructure, inadequate services and few opportunities. As a result, migration is common: every rural villager has relatives in town, and most townspeople still call a rural village ‘home’. This paper begins by asking what happens when mobile phones enter this equation.

Mobile phones in PNG are both new and ubiquitous, with one third of the population now owning handsets. Digital networks spread through the construction of communications towers, and the single most dramatic expansion of this network took place in 2011, in which the Western Province Communications Project built 60 towers to provide digital infrastructure for a widely dispersed population. This development has been important for people in Telefolmin, where I have conducted most of my previous work. Following networks of personal relationships along migration pathways between villages and towns, I examine the ways in which mobile phone use and strategies of connection at a distance play an increasing role in Telefol lives.

I close with two linked arguments. The first is that the common distinction between “social” and “instrumental” uses of mobile communications does not hold up well for PNG. The second is that the mobile phone raises new issues and provides new means for the management and control of personal networks, a process which is part of a larger set of tensions about how to define individuals in their relationships.

Abstract:
In addition to Northwest Coast art being increasingly treated as a form of fine art, Northwest Coast designs are now also being mechanically reproduced on many decorative and utilitarian objects, such as mugs, tote bags, T-shirts, and fridge magnets. Over the decades, the art and artware market’s expansions have continuously raised questions about the effects and ethics of cultural commodification, in particular with respect to the often unequal distribution of risks and benefits among the market’s various stakeholders. In this presentation, I will discuss how Aboriginal and non-Aboriginal individuals who are currently participating in the Native Northwest Coast artware industry in Vancouver view this market’s present configuration and envision its future.

November 1, 2012, 'The Anthropology (and Archaeology) of Numbers'

The Anthropology (and Archaeology) of Numbers 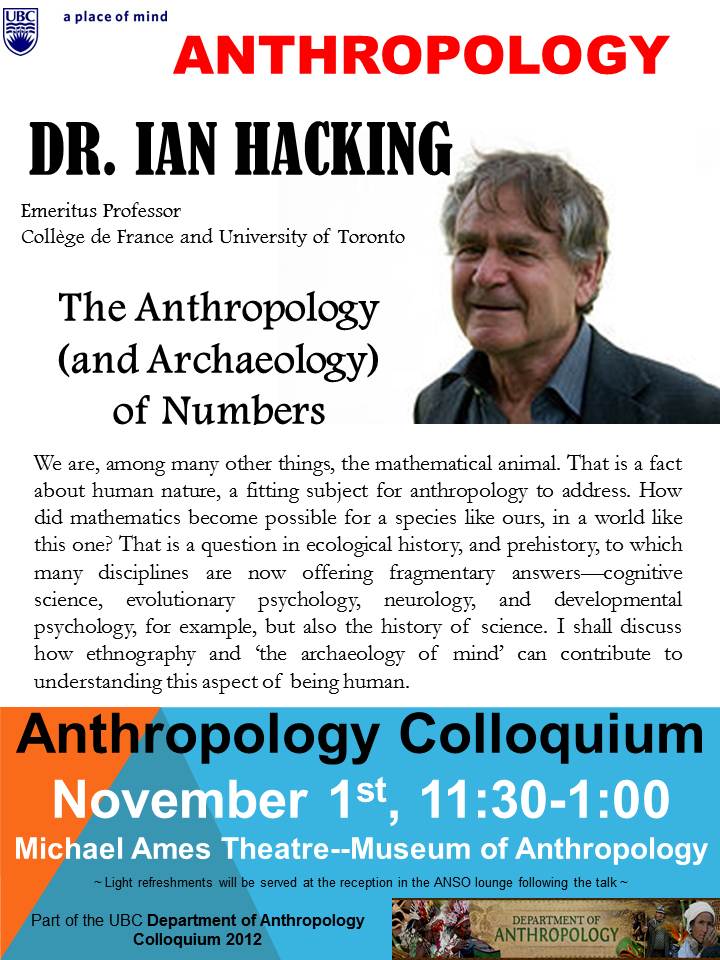 Abstract:
We are, among many other things, the mathematical animal. That is a fact about human nature, a fitting subject for anthropology to address. How did mathematics become possible for a species like ours, in a world like this one? That is a question in ecological history, and prehistory, to which many disciplines are now offering fragmentary answers—cognitive science, evolutionary psychology, neurology, and developmental psychology, for example, but also the history of science. I shall discuss how ethnography and ‘the archaeology of mind’ can contribute to understanding this aspect of being human.

October 18, 2012, 'Entangled in the Fur Trade: The Archaeology of Contact on the Lower Columbia River'

Entangled in the Fur Trade: The Archaeology of Contact on the Lower Columbia River 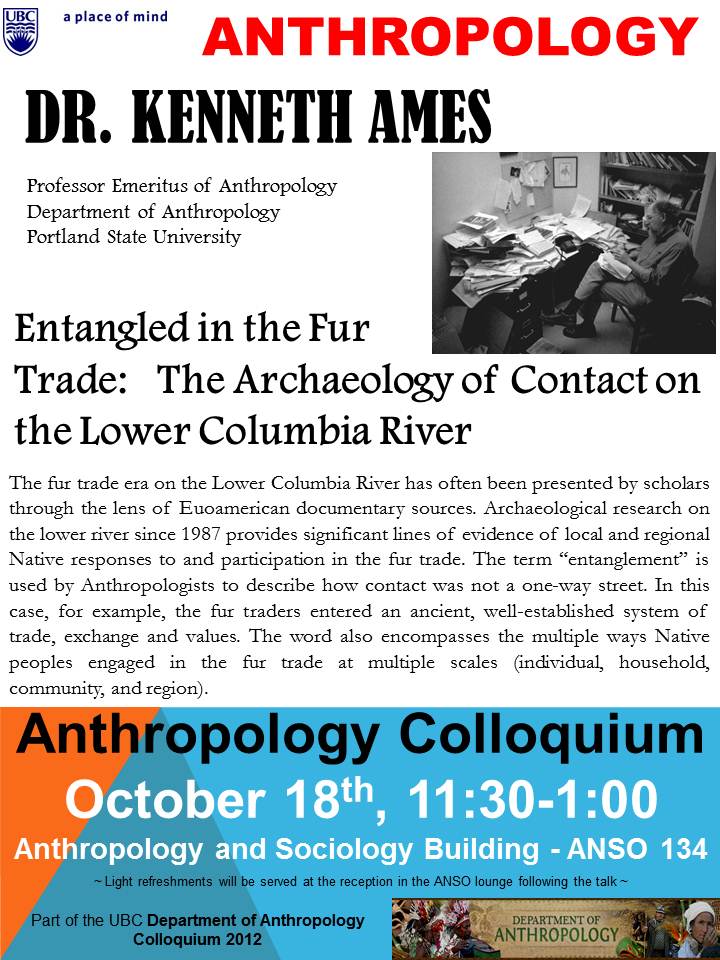 Abstract:
The fur trade era on the Lower Columbia River has often been presented by scholars through the lens of Euoamerican documentary sources. Archaeological research on the lower river since 1987 provides significant lines of evidence of local and regional Native responses to and participation in the fur trade. The term “entanglement” is used by Anthropologists to describe how contact was not a one-way street. In this case, for example, the fur traders entered an ancient, well-established system of trade, exchange and values. The word also encompasses the multiple ways Native peoples engaged in the fur trade at multiple scales (individual, household, community, region). 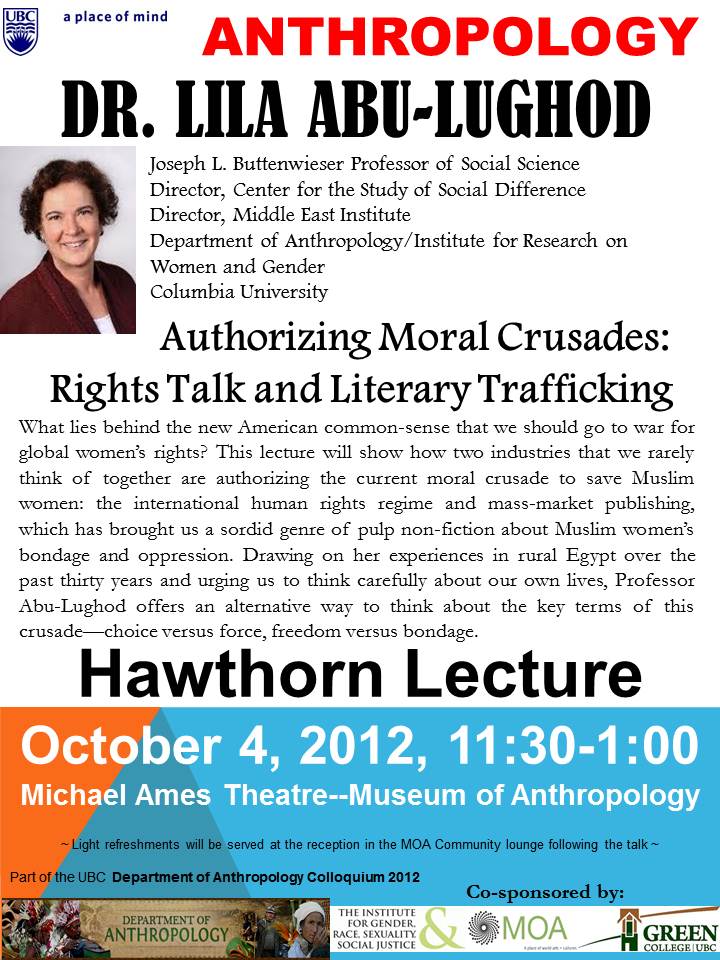 Abstract:
What lies behind the new American common-sense that we should go to war for global women’s rights? This lecture will show how two industries that we rarely think of together are authorizing the current moral crusade to save Muslim women: the international human rights regime and mass-market publishing, which has brought us a sordid genre of pulp non-fiction about Muslim women’s bondage and oppression. Drawing on her experiences in rural Egypt over the past thirty years and urging us to think carefully about our own lives, Professor Abu-Lughod offers an alternative way to think about the key terms of this crusade—choice versus force, freedom versus bondage.