October 5, 2017 'Beyond the Rainbow Bridge: Vernacular Ontologies and Animal Afterlives'

Beyond the Rainbow Bridge: Vernacular Ontologies and Animal Afterlives 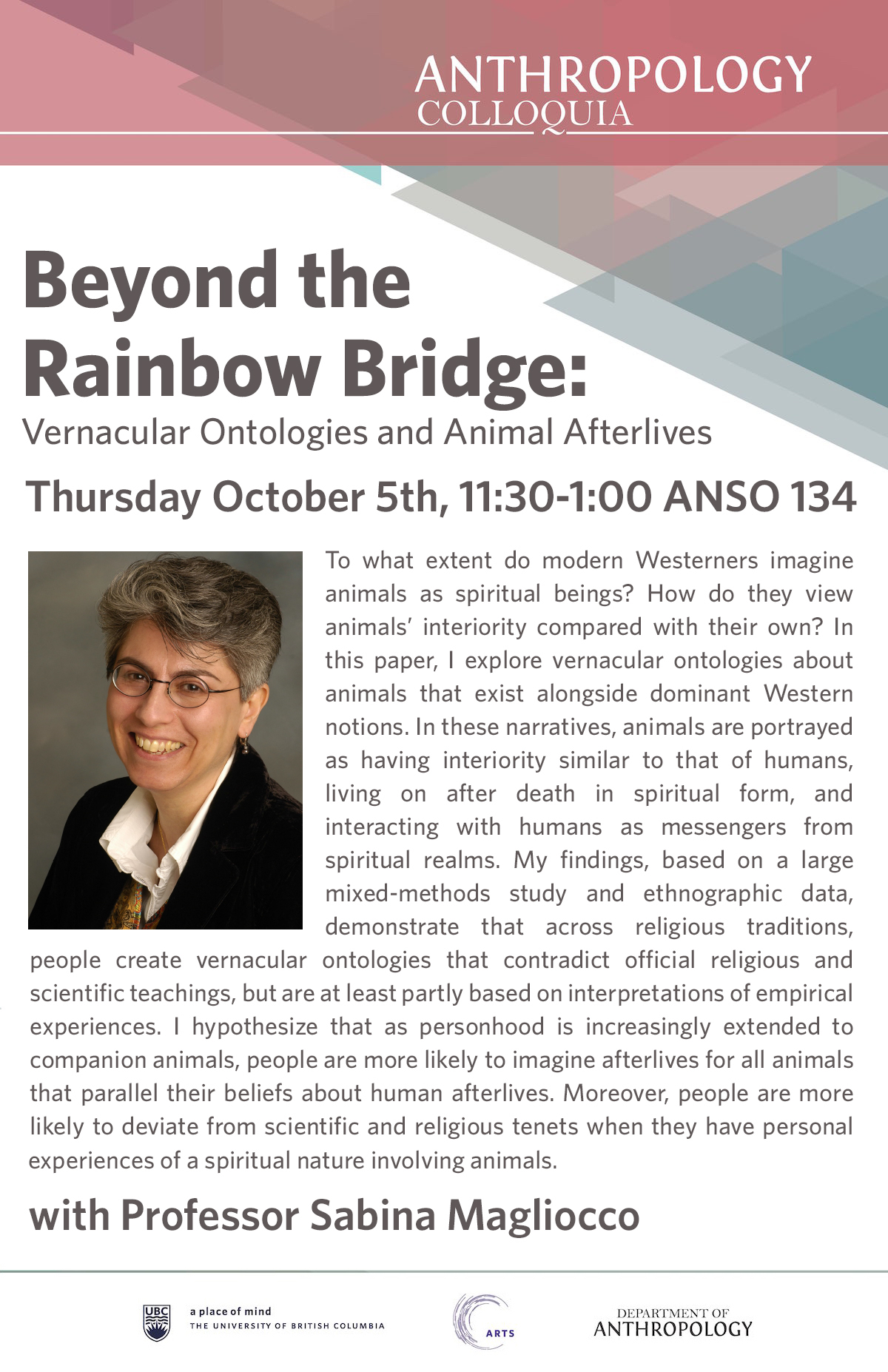 To what extent do modern Westerners imagine animals as spiritual beings? How do they view animals’ interiority compared with their own? In this paper, I explore vernacular ontologies about animals that exist alongside dominant Western notions. In these narratives, animals are portrayed as having interiority similar to that of humans, living on after death in spiritual form, and interacting with humans as messengers from spiritual realms. My findings, based on a large mixed-methods study and ethnographic data, demonstrate that across religious traditions, people create vernacular ontologies that contradict official religious and scientific teachings, but are at least partly based on interpretations of empirical experiences. I hypothesize that as personhood is increasingly extended to companion animals, people are more likely to imagine afterlives for all animals that parallel their beliefs about human afterlives. Moreover, people are more likely to deviate from scientific and religious tenets when they have personal experiences of a spiritual nature involving animals.

Sabina Magliocco, Ph.D. grew up in Italy and the United States. She received an AB from Brown University in 1980 and a Ph.D. from Indiana University – Bloomington in 1988. She has taught at California State University, where she served two terms as department chair, as well as the University of California – Berkeley, the University of California – Santa Barbara, UCLA, and the University of Wisconsin – Madison. A recipient of Guggenheim, National Endowment for the Humanities, Fulbright and Hewlett fellowships, and an honorary Fellow of the American Folklore Society, she has published on religion, folklore, foodways, festival and witchcraft in Europe and the United States, and is a leading authority on the modern Pagan movement. Her current research is on nature and animals in the spiritual imagination. Prof. Magliocco has appeared as an occasional guest on a number of popular television series about modern legends and beliefs.

October 19, 2017 'The Fire and the Rose are One: Eroticism and Ritual as Agents of Change in American Contemplative Christianity'

The Fire and the Rose are One: Eroticism and Ritual as Agents of Change in American Contemplative Christianity 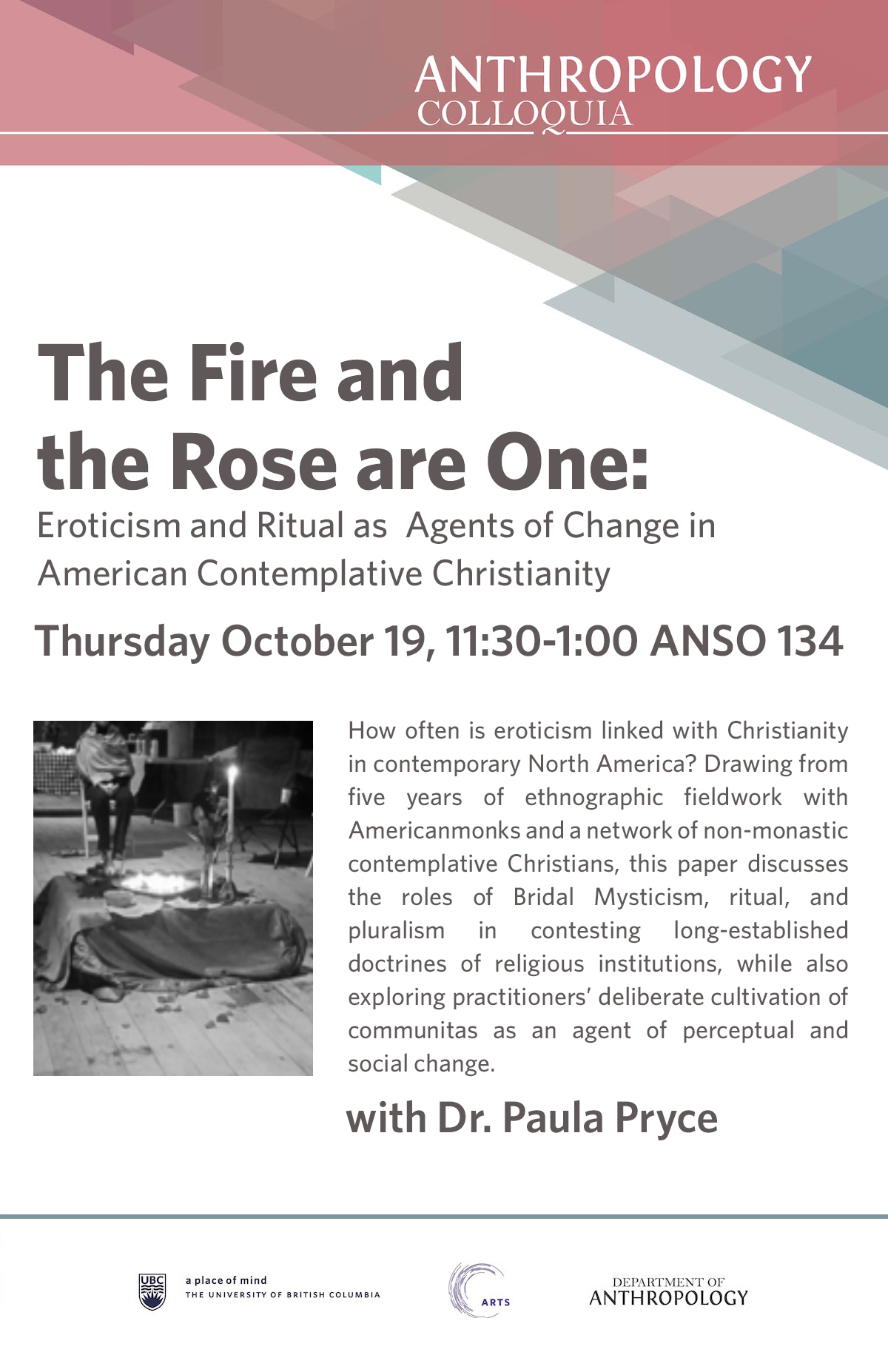 How often is eroticism linked with Christianity in contemporary North America? Drawing from five years of ethnographic fieldwork with American monks and a network of non-monastic contemplative Christians, this paper discusses the roles of Bridal Mysticism, ritual, and pluralism in contesting long-established doctrines of religious institutions, while also exploring practitioners’ deliberate cultivation of communitas as an agent of perceptual and social change.

November 2, 2017, 'Repatriation from an Angolan Perspective: Politics, Advertising, and Business'

Repatriation from an Angolan Perspective: Politics, Advertising, and Business 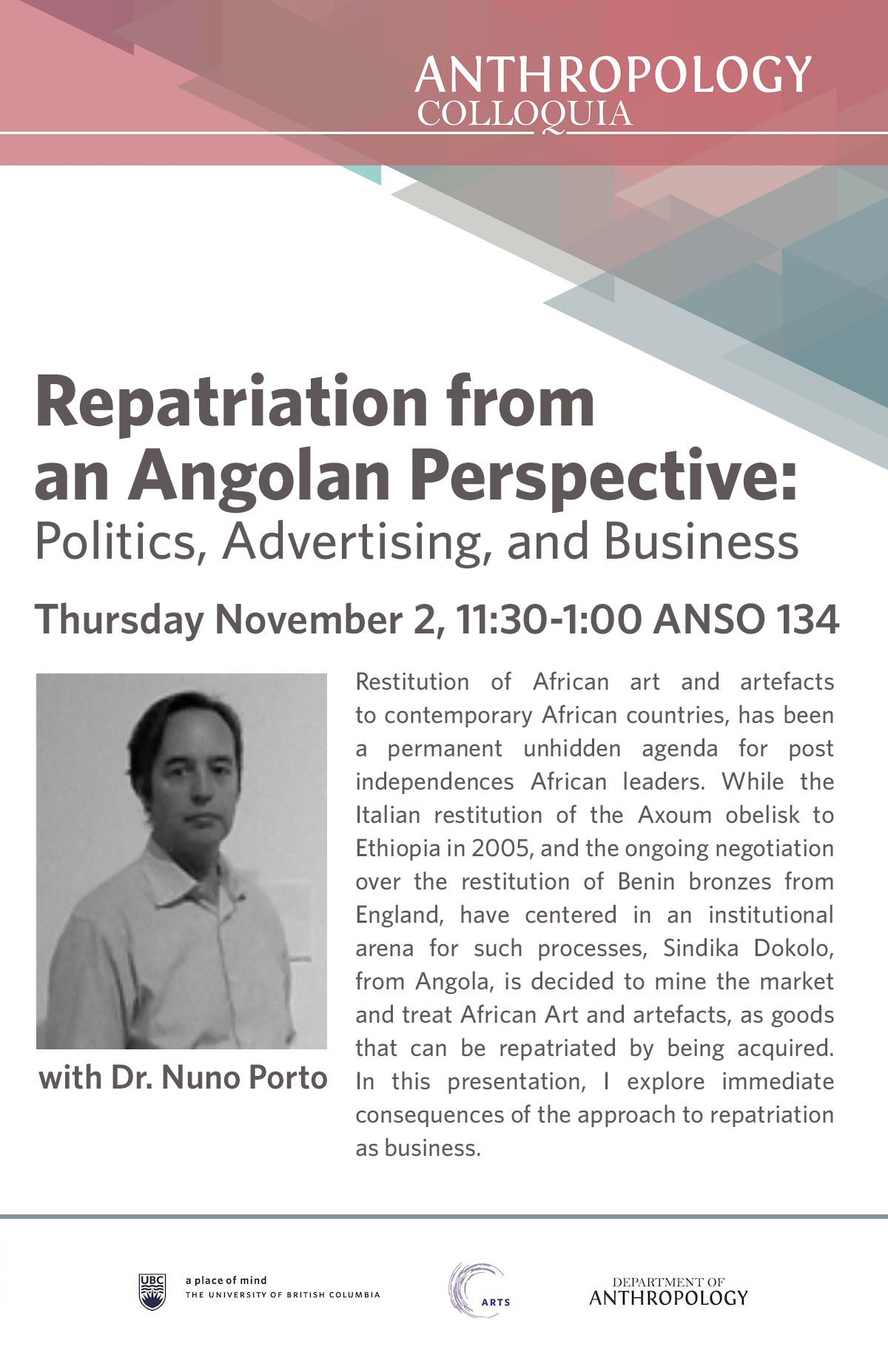 Restitution of African art and artefacts to contemporary African countries, has been a permanent unhidden agenda for post independences African leaders. While the Italian restitution of the Axoum obelisk to Ethiopia in 2005, and the ongoing negotiation over the restitution of Benin bronzes from England, have centered in an institutional arena for such processes, Sindika Dokolo, from Angola, is decided to mine the market and treat African Art and artefacts, as goods that can be repatriated by being acquired. In this presentation, Dr. Porto explore immediate consequences of the approach to repatriation as business.

November 16, 2017, 'Can We Measure ‘Impacts’ to Culture? The Role of Anthropology in Canada’s Shifting Legal and Regulatory Regimes'

Can We Measure ‘Impacts’ to Culture? The Role of Anthropology in Canada’s Shifting Legal and Regulatory Regimes 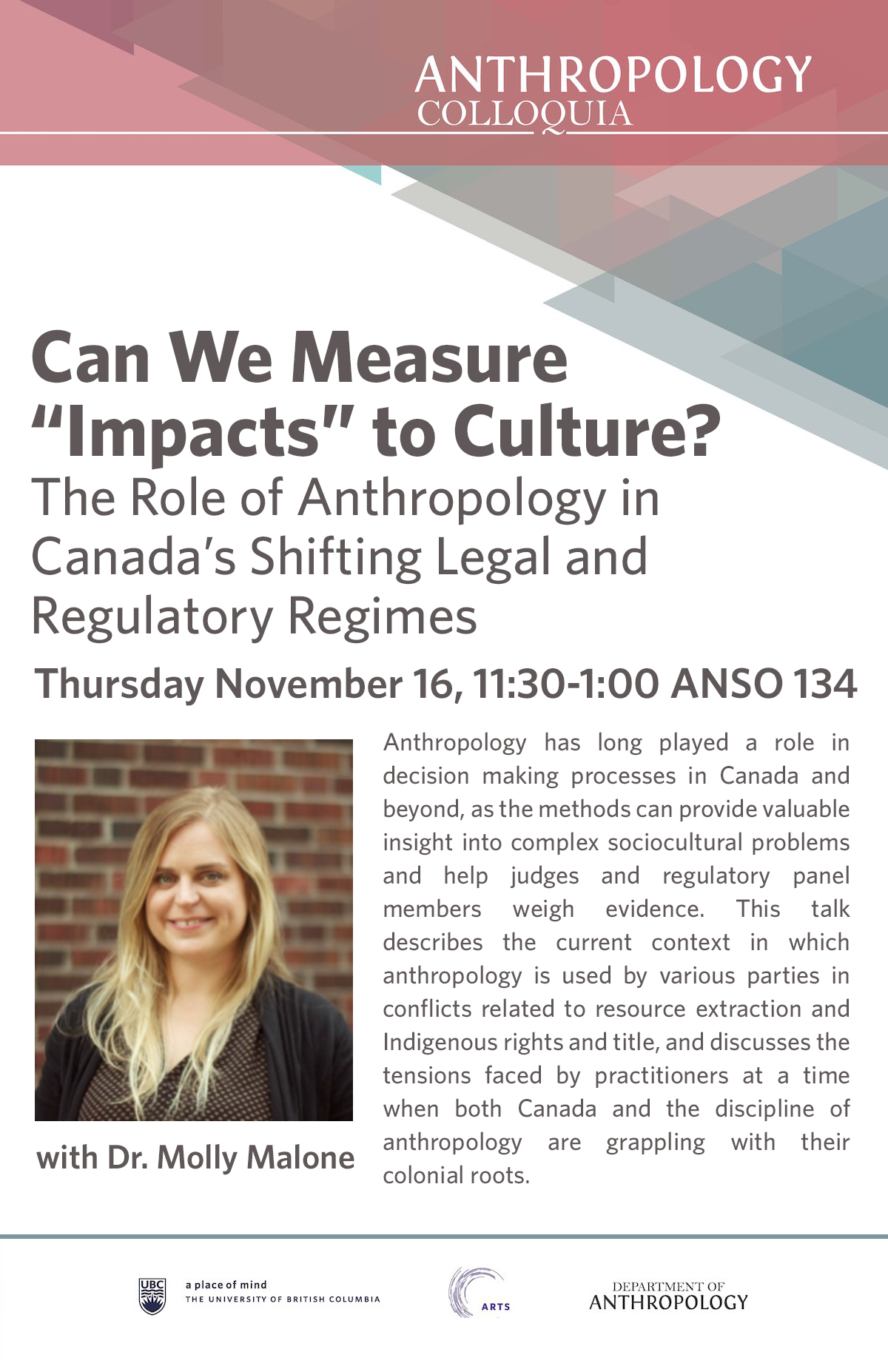 Anthropology has long played a role in decision-making processes in Canada and beyond, as the methods can provide valuable insight into complex sociocultural problems and help judges and regulatory panel members weigh evidence. This talk describes the current context in which anthropology is used by various parties in conflicts related to resource extraction and Indigenous rights and title, and discusses the tensions faced by practitioners at a time when both Canada and the discipline of anthropology are grappling with their colonial roots.