My research examines how Sikh women who survived the anti-Sikh massacre in 1984 in Delhi, India, cope with the long-term legacies of violence and trauma amid the backdrop of the urban space of the city. After the assassination of then Prime Minister Indira Gandhi by her Sikh bodyguards, approximately thirty-five hundred Sikh men were killed in October and November 1984. Many of the survivors, Sikh widows and their families, were relocated shortly after to the “Widow Colony,” a designated slum also known as Tilak Vihar.

I begin by discussing in depth the space of the Widow Colony and its relation to the rest of the city of Delhi. I then analyze the events of the 1984 massacre through the narratives of Sikh widows and how they remember their experiences of violence. I discuss how violence can have long-term ramifications for everyday life in arenas such as kinship networks, economic stability, health and wellness, and social life. These experiences are further amplified by gender, caste, and class. I also examine the impact of the stigma of widowhood in this community. This research seeks to interrogate how memories of violence inform, and are constituted by, embodied, affective practices carried out in a gendered space produced by the state. I argue that Sikh widows cope with long-term trauma by creating new forms of sociality and memory through their everyday lives and religious practices in the Widow Colony. The memory of the 1984 violence figures heavily among the Sikh diaspora. Thus, I also explore the relationship between the Widow Colony and Sikhs in the transnational arena. 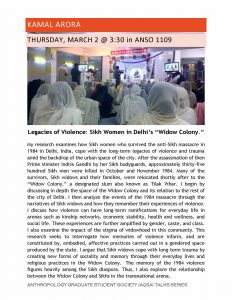