“Beyond the Rainbow Bridge: Vernacular Ontologies and Animal Afterlives”

To what extent do modern Westerners imagine animals as spiritual beings? How do they view animals’ interiority compared with their own? In this paper, I explore vernacular ontologies about animals that exist alongside dominant Western notions. In these narratives, animals are portrayed as having interiority similar to that of humans, living on after death in spiritual form, and interacting with humans as messengers from spiritual realms. My findings, based on a large mixed-methods study and ethnographic data, demonstrate that across religious traditions, people create vernacular ontologies that contradict official religious and scientific teachings, but are at least partly based on interpretations of empirical experiences. I hypothesize that as personhood is increasingly extended to companion animals, people are more likely to imagine afterlives for all animals that parallel their beliefs about human afterlives. Moreover, people are more likely to deviate from scientific and religious tenets when they have personal experiences of a spiritual nature involving animals.

About the Speaker: Sabina Magliocco, Ph.D. grew up in Italy and the United States. She received an AB from Brown University in 1980 and a Ph.D. from Indiana University – Bloomington in 1988. She has taught at California State University, where she served two terms as department chair, as well as the University of California – Berkeley, the University of California – Santa Barbara, UCLA, and the University of Wisconsin – Madison. A recipient of Guggenheim, National Endowment for the Humanities, Fulbright and Hewlett fellowships, and an honorary Fellow of the American Folklore Society, she has published on religion, folklore, foodways, festival and witchcraft in Europe and the United States, and is a leading authority on the modern Pagan movement. Her current research is on nature and animals in the spiritual imagination. Prof. Magliocco has appeared as an occasional guest on a number of popular television series about modern legends and beliefs. 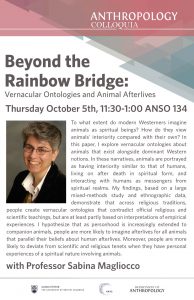