Home / Events / Hawthorn Lecture: Marisol de la Cadena, “When Nature is not Only Nature? Stories from the Anthropo-not-seen”

Hawthorn Lecture: Marisol de la Cadena, “When Nature is not Only Nature? Stories from the Anthropo-not-seen”

When Nature is not Only Nature? Stories from the Anthropo-not-seen

Accelerated consumption of minerals, oil and energy as well as the development of infrastructure to make them available for consumption, has led to an unprecedented destruction of what we know as nature. Joining protests in defense of the environment some indigenous collectives have made public that what is being destroyed is other-than-human entities, crucial participants in world-making practices that confuse the division between nature and humanity. Presenting the idea that nature is not only such, the talk discusses an emergent ‘politics across divergence,’ or the possibility for alliances that require becoming through what Isabelle Stengers has called “interests in common that that are not the same interests.”

About the speaker: Dr. de la Cadena was trained as an anthropologist in Peru, England, France and the US. Her interests include the study of politics, multispecies (or multi-entities) relations, indigeneity, history and the a-historical, world anthropologies and the anthropologies of worlds. In all these areas, her concern is with the relationship between concepts and methods, and interfaces as analytical sites. More prosaically, she is interested in ethnographic concepts that blur the distinction between what we call theory and the empirical, indicating the limits of both, and opening them up to what exceeds them.

Her recent book Earth Beings. Ecologies of Practice Across Andean Worlds (2015) is based on conversations with two Quechua speaking men that lived in Cuzco (Peru). Through these conversations, tradition-bearer and ethnographer think together about life at the intriguing crossroads where modern politics (and history) and earth-beings (and the ahistorical) meet and diverge, thus exceeding each other. The book is an ethnography concerned with the concreteness of incommensurability and the eventfulness of the ahistorical.

Her current field sites are cattle ranches and veterinary schools in Colombia, where she engages practices and relations between people, cows, and ‘things’ in general. Thinking at divergent bio/geo interfaces, she is interested in capturing “the stuff” that makes life and death in conditions of dramatic ecological and political change as the country strives to transition from the violence of war to a delicate and fraught condition of peace. 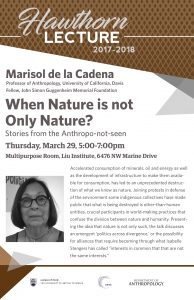