The Anthropology of Asia Talk Series (organized by Millie Creighton) 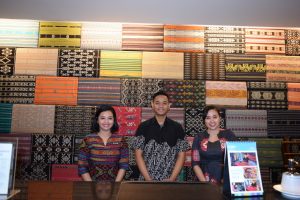 When discussing cultural heritage, many scholars have problematized the seemingly inevitable, highly politicized acts of selecting. Yet another, equally problematic feature of the UNESCO designation is the creation of “a list”. By being listed in the inventory of Intangible Cultural Heritage (ICH) of Humanity, a certain cultural practice such as the making of crafts is taken out of its original context, including its particular usage or usages informed by the socio-cultural background; As a result, these cultural practices and expressions will be “accorded a value of a different and more general kind than any value they previously had” (Hafstein 2009:104). Such a process of “heritigization” may also occur within nation-states. This talk will shed light on the ways in which the act of cultural listings have influenced local communities and people who have made and used hand-woven textiles in the peripheral islands of eastern Indonesia. When their products become recognized as part of a common heritage of the nation, new usages and designs start to stimulate the renewed negotiation of group identities.