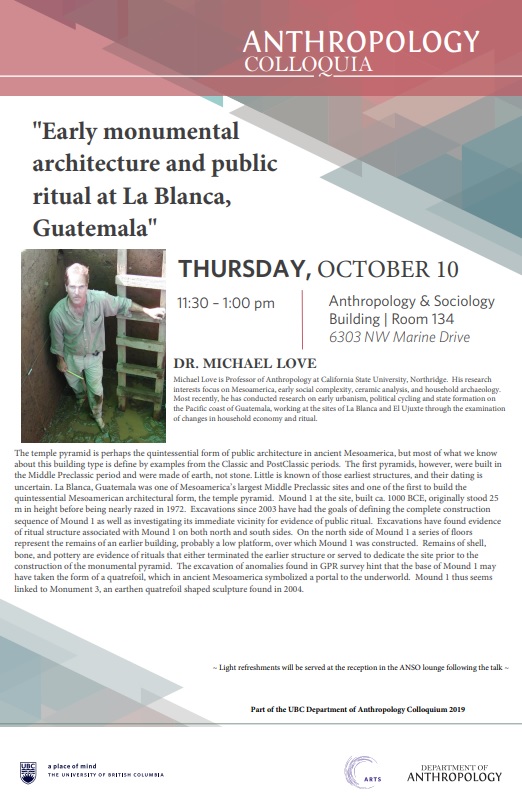 The temple pyramid is perhaps the quintessential form of public architecture in ancient Mesoamerica, but most of what we know about this building type is define by examples from the Classic and PostClassic periods.  The first pyramids, however, were built in the Middle Preclassic period and were made of earth, not stone. Little is known of those earliest structures, and their dating is uncertain. La Blanca, Guatemala was one of Mesoamerica’s largest Middle Preclassic sites and one of the first to build the quintessential Mesoamerican architectural form, the temple pyramid.  Mound 1 at the site, built ca. 1000 BCE, originally stood 25 m in height before being nearly razed in 1972.  Excavations since 2003 have had the goals of defining the complete construction sequence of Mound 1 as well as investigating its immediate vicinity for evidence of public ritual.  Excavations have found evidence of ritual structure associated with Mound 1 on both north and south sides.  On the north side of Mound 1 a series of floors represent the remains of an earlier building, probably a low platform, over which Mound 1 was constructed.  Remains of shell, bone, and pottery are evidence of rituals that either terminated the earlier structure or served to dedicate the site prior to the construction of the monumental pyramid.  The excavation of anomalies found in GPR survey hint that the base of Mound 1 may have taken the form of a quatrefoil, which in ancient Mesoamerica symbolized a portal to the underworld.  Mound 1 thus seems linked to Monument 3, an earthen quatrefoil shaped sculpture found in 2004.

Dr. Michael Love is Professor of Anthropology at California State University, Northridge.  His research interests focus on Mesoamerica, early social complexity, ceramic analysis, and household archaeology.   Most recently, he has conducted research on early urbanism, political cycling and state formation on the Pacific coast of Guatemala, working at the sites of La Blanca and El Ujuxte through the examination of changes in household economy and ritual.