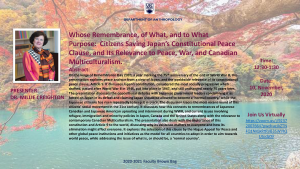 Whose Remembrance, of What, and to What Purpose:  Citizens Saving Japan’s Constitutional Peace Clause, and Its Relevance to Peace, War, and Canadian Multiculturalism.

On the verge of Remembrance Day 2020, a year marking the 75th anniversary of the end of World War II, this presentation explores peace and war from a view of Japan, and the worldwide relevance of its constitutional peace clause, Article 9. It discusses Japan’s constitution, considered the most socially progressive when drafted, passed after World War II in 1946, put into place in 1947, and still unchanged nearly 75 years later. The presentation discusses the oppositional debates with Japanese government leaders condemning it as forced on Japan in its defeat and claiming Japan should be allowed to become a ‘normal country,’ while the Japanese citizenry has risen repeatedly to keep it in place. The discussion traces the most recent round of this citizens’ social movement in the 21st century. It discusses how this connects to remembrances of Japanese Canadian and Japanese American uprooting and internment during WWII, and current issues involving refugee, immigration and minority policies in Japan, Canada and the United States along with the relevance to contemporary Canadian Multiculturalism. The presentation also deals with the importance of this constitution and Article 9 to the world, discussing why its existence matters to everyone and how its elimination might affect everyone. It explores the selection of this clause by the Hague Appeal for Peace and other global peace institutions and initiatives as the model for all countries to adopt in order to aim towards world peace, while addressing the issue of what is, or should be, a ‘normal country’.