UBC Archaeology Day 2015 aims at raising public awareness of the ever increasing destruction of cultural heritage and archaeological resources in many parts of the world, and addressing the urgency and importance of protecting the vanishing heritage for our common future.

In this unprecedented era of globalization and urbanization, one of the most pressing global problems today is the protection and conservation of historical resources and cultural heritage. Untold numbers of archaeological sites and all forms of historic heritage around the world are being ruthlessly obliterated or severely damaged in the midst of armed conflicts and wars, as well as in the name of development. Widespread looting of archaeological sites has been accelerating worldwide, a phenomenon that can be directly related to the commercial marketing of illegally excavated artifacts by auction houses and galleries. Moreover, the indigenous presence in many places across the world is being obliterated deliberately at an unprecedented scale and pace. The knowledge obtained through proper archaeological excavation is irreplaceable, cultural heritage is nonrenewable, and every indigenous culture must be cherished as an essential part of modern humanity. Once destroyed they are lost forever.

UBC Archaeology Day 2015 is open to anyone with an interest in, and concern for, the protection of our endangered cultural heritage, archaeological resources, and indigenous culture here in British Columbia as well as across the world.

This event is organized by the Department of Classical, Near Eastern and Religious Studies, and Department of Anthropology at the University of British Columbia.

Inquiries about the event should be directed to Dr. Zhichun Jing at jingzh@mail.ubc.ca or 604-822-4937

A Momentary Erasure of Millennia: The Cultural Heritage Crises in Syria and Northern Iraq

Two Steps Forward, One Step Back: The Slow Dance of Indigenous Heritage Protection

Evaluation and Conservation Plan for Hammam in Akko, Israel

In a Hard Place: Some Observations on Heritage Management in British Columbia

Cultural Heritage in Ruins: The Failure of Archaeological Practice in Syria

Cultural Heritage in Tunisia, Before and After the Revolution: The Challenges and Opportunities of a Pluralistic Past

Nothing Could Be Further From the Truth: Grace Islet, a Coast Salish Cemetery (Shmukw’elu) and Colonial Conflict

Reflections of Dilmun and Tylos: Threats to Cultural Heritage in Bahrain

Friends of Cedar Mesa: Protecting Landscapes in the US Southwest

Whose Marbles?  Lord Elgin and the sculpture of the Parthenon

Statement on the Destruction of Cultural Heritage in Iraq and Syria 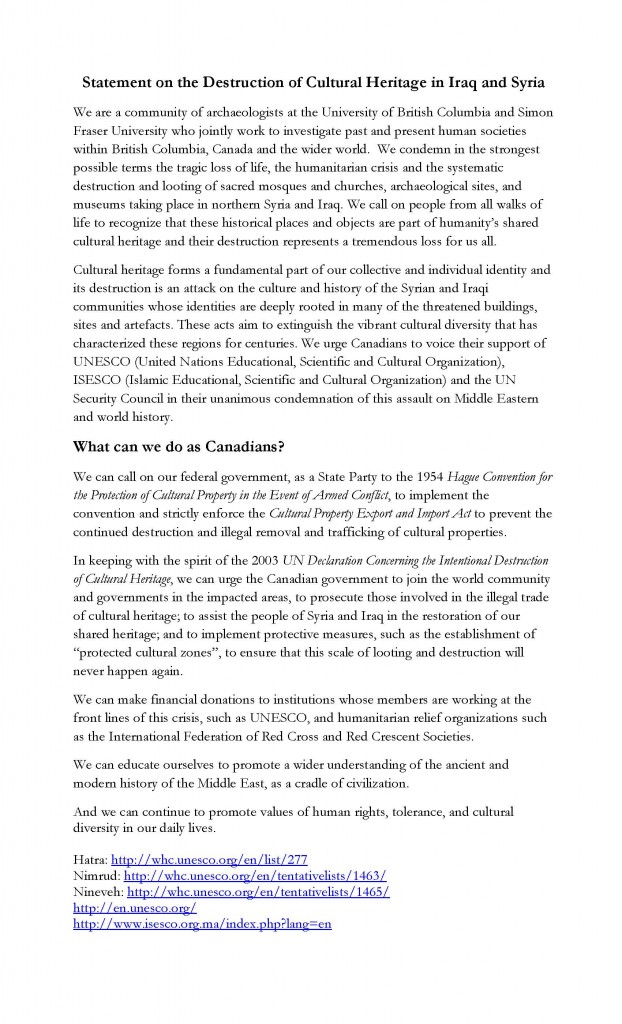