Introduction to Anthropology with Wade Davis 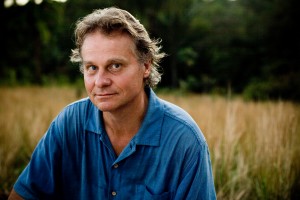 In 2014, the Department of Anthropology is pleased to welcome internationally renown scholar, Dr. Wade Davis to our department.  Dr. Davis is a Professor of Anthropology and the LEEF Chair in Cultures and Ecosystems at Risk at the University of British Columbia. Between 1999 and 2013 he served as Explorer-in-Residence at the National Geographic Society and is currently a member of the NGS Council of Explorers. Author of 17 books, including The Serpent and the Rainbow, One River, The Wayfinders and The Sacred Headwaters, he holds degrees in anthropology and biology and received his Ph.D. in ethnobotany, all from Harvard University. His many film credits include Light at the Edge of the World, an eight-hour documentary series written and produced for the National Geographic. Davis is the recipient of ten honorary degrees, as well as the 2009 Gold Medal from the Royal Canadian Geographical Society for his contributions to anthropology and conservation, the 2011 Explorers Medal, the highest award of the Explorers Club, the 2012 David Fairchild Medal for botanical exploration, and the 2013 Ness Medal for geography education from the Royal Geographical Society. His latest book, Into the Silence, received the 2012 Samuel Johnson prize, the top award for literary nonfiction in the English language. His research interests have taken him throughout the world, and he has had direct experience with all of the cultures that will be celebrated and explored in Anthropology 100.

Anthropology 100 (Introduction to Anthropology) will explore the central revelation of cultural anthropology; the idea that the social world in which we live does not exist in some absolute sense, but rather is just one model of reality, the consequence of one set of intellectual and spiritual choices that our particular cultural lineage made, however successfully, many generations ago. 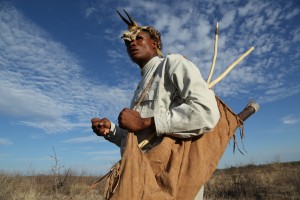 Koketso Koki Mookodi stands in the traditional territory of his people, the Kalahari San in Africa in 2013. Photo: Wade Davis.

Other peoples of the world are not failed attempts to be us, failed attempts to be modern. Each culture is a unique answer to a fundamental question. What does it mean to be human and alive? When asked that question humanity responds in 7000 different languages, voices that collectively comprise our repertoire for dealing with all the challenges that will confront us as a species in the coming centuries. Every culture has something to say, and each deserves to be heard.

Through case studies and narratives drawn from throughout the world, the bones of the theoretical body of anthropology will be assembled. But your first obligation as a student will be to fill your eyes with wonder. In Polynesia we’ll set sail with navigators whose ancestors settled the Pacific ten centuries before Christ. In the Amazon await the peoples of the anaconda, the Barasana and Makuna, who cognitively do not distinguish green from blue, for the canopy of the forest is seen as the canopy of the heavens. In Borneo we’ll learn of the nomadic Penan whose measure of wealth is not material but rather the strength of social relations that bind them together as a community. In the Kalahari, we’ll track with the San, the original culture that stayed put when the rest of humanity went walking, a journey out of Africa that in 40,000 years, 2500 generations, brought the human spirit to every corner of the habitable world.

Ours too will be a long journey from the upper Paleolithic caves of Dordogne in France to the pyramids of Giza, from Greenland to the Sahara, Timbuktu to the Songlines of Australia. We’ll study how people everywhere have sought illumination through ordeal, the ingestion of visionary plants, the power and practice of the hunt. In Africa, we’ll bear witness to the white darkness of Vodoun, in Tibet the Buddhist science of the mind, in Mongolia the shamanic art of healing. Beauty and gender in the dance of the Wodabe in Niger, coming of age in the pastoral traditions of the sub-Saharan Sahel, among the Rendille, Samburu and Gabra, notions of Sacred Geography among the Kwakwaka’wakw and the Tahltan, the Kogi and Arhuacos, the Elder Brothers of the Sierra Nevada de Santa Marta, exchange and reciprocity in the legendary Kula Ring of the Trobriand Islands of New Guinea, an ecology of mind again based on reciprocity among the descendants of the Inca in the southern Andes of Peru.

Understanding the lessons of this journey will be our mission for the next century. Of the world’s 7000 languages, fully half may disappear within our lifetimes.  At risk is a vast archive of knowledge and expertise, a catalogue of the imagination that is the human legacy. Genocide is universally condemned. Ethnocide, the destruction of a people’s way of life is often promoted as proper development policy. Change and technology pose no threat to culture, but power does. These are not delicate societies destined to fade away. In every instance they are living dynamic peoples being driven out of existence by identifiable forces, industrial, military, and ideological, not the least of which is the ubiquitous cult of modernity.

If human beings are the agents of cultural loss, we can be facilitators of cultural survival. There is a fire burning over the Earth, taking with it plants and animals, cultures, languages, ancient skills and visionary wisdom. Quelling this flame and reinventing the poetry of diversity is among the most important challenges of our times. This course will indeed fill your eyes with wonder, but also your hearts with passion and your minds with the tools that will allow you to play an active role in the reinvention of our world.