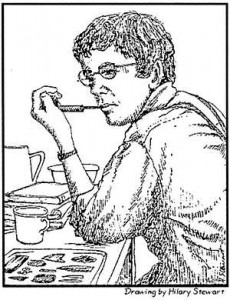 We dedicate these words to the memory and accomplishments of Moira Irvine who spent more than three decades involved in archaeology at the University of British Columbia, first as a student and then, for more than 25 years, general factotum.

Moira was born in Calgary. Her parents immigrated from the United Kingdom and met through the Alpine Club of Canada, an institution Moira belonged to throughout her life. Her family moved to Vancouver in 1942, and Moira was educated in the local public schools. She began UBC in 1958 and graduated in 1962 with a BA thesis entitled “The Antler Industry at Musqueam Southeast.”

After traveling in Europe and working for a while in a bookstore in London, she returned to Vancouver and became Prof. Charles E. Borden’s archaeological assistant. She began on an informal basis, but this job evolved first into a “soft money” position and then, in the early 1970s, became fully funded. Her field experience during the 1960s included the famous Fraser River Canyon sites of Milliken and Esilao. As time went on, Prof. Borden gave her more responsibility, including directing excavations, in 1968, at Old Musqueam (DhRt-3).

During the “Borden Period” in the 1960s Moira also served as an important intermediary between the somewhat distant Prof. Borden and archaeology students, a number of whom went on to become professional anthropologists. At the same time, she developed her skills as an illustrator and a photographer.

In the early 1970s Moira participated in Borden’s last excavations at the South Yale site (DjRi-7) and supported those at Musqueam Northeast (DhRt-4). In 1973 she undertook to direct salvage work at the South Yale site (Irvine 1973) which resulted in important information supporting a relatively late date for the Pasika cobble tool.

She successfully combined the demanding duties of working for a number of archaeologists with being an important resource for students. Moira also assisted, willingly, in the often unpleasant task of setting up a faunal collection. As part of this greater concern with subsistence oriented archaeology she aided Leonard Ham in developing techniques to determine shellfish seasonality (Ham and Irvine 1975).

In spite of diabetes which was diagnosed in 1970, Moira continued her interests in outdoor life, including climbing, canoeing and skiing. In 1974 she was appointed editor of the Canadian Alpine Journal (a post she held until 1986) and transformed the journal into the quality publication it is today. As if these activities were not enough, Moira also bought, with two friends, a bookstore in Courtenay, on Vancouver Island. In order to maintain these other commitments Moira reduced her UBC position to three-quarter time.

Moira will always be remembered for her wide range of skills. From equipping a field expedition to mapping, drawing and photographing artifacts, preparing museum displays and laying out articles and monographs for publications, Moira could always be counted on. She always answered cries for help from the field, often in innovative ways. Moira was particularly good at solving practical research problems using materials at hand. Many students with proposed projects were directed to her and came away with workable solutions to their particular research problems.

In acknowledgement of this aspect of Moira’s contributions, we have begun The Moira Irvine Fund to honour her. This fund will be used to provide small awards to help undergraduate archaeological research, including fieldwork, collections analysis, report preparation for publications and travel to conferences to present research results. We are happy to state that this fund has already gone beyond the minimum necessary to be administered by the UBC Awards Office. Those interested in contributing to this tax deductible fund may send donations to The Moira Irvine Fund, Laboratory of Archaeology, Department of Anthropology, University of British Columbia, 6303 N.W. Marine Drive, Vancouver, B.C. V6T 1Z1.

Moira had many strengths. Mainly self-taught, she had a unique idiosyncratic style. At the same time she could be surprisingly flexible and resourceful; as an example, in spite of her aversion to many aspects of modern technology, she designed and produced the Department Bulletin on the mainframe computer using a package that stymied many experienced users. She was the UBC archaeologists’ link with their past; she was an irreplaceable source of unwritten information about the social and intellectual context of Borden’s work, and the history of many UBC collections. She is – and will continue to be – greatly missed.

Irvine, C.M. 1973. Report of salvage excavations at the South Yale site (DjRi 7). Report to the Archaeological Sites Advisory Board, Victoria.