Brianna Plant, President of the Anthropology Student Association for 2020-21

Brianna Plant is an undergraduate student at UBC and President of the Anthropology Student Association for 2020-21. Now in her final year, she is majoring in Anthropology with a minor in Anthropological Archaeology. Brianna was in the midst of writing final papers when we sat down for this interview in spring of 2021.

BP:      I have interest in both. That’s my biggest issue when trying to decide what to do after I graduate. I’m debating which route to choose, cultural anthropology or archaeology? Ethnography or excavation?

LP:       That’s a difficult one! So, you’re really at an important transitional moment.

BP:      Yes! All these questions I’ve had throughout my university career are coming up again. I can’t say “I’ll cross that bridge when I get to it” anymore— the bridge is right in front of me!

LP:       Are you tired yet of people asking you what you’ll do after you graduate?

BP:      Oof, yes. [laughing] Specifically for anthropology, it’s a loaded question because you can do so much with anthropology. It can be applied to so many things. You go out and look for interesting and relevant jobs that exist at that time and in that place. You don’t always know what to expect. But when I tell this to people they respond with ‘Oh, so you have no idea’. I say, ‘Kind of? But also, it really could be almost anything!’

LP:       The world is your oyster! Just apply to everything and see what happens.

BP:      Exactly! I have the benefit of having a grandmother who was a Human Resource Manager. She’s been helping me with resumes and cover letters, which has been really helpful. After I graduate, my only plan is to apply everywhere I can for jobs.

LP:       Well, I won’t ask you too much about the future, but I wish you luck! In the meantime, let’s do some reflection. How’d you decide to go into anthropology and archaeology?

BP:      When I was quite little, as young as 7, I was obsessed with Eyewitness books, which are nonfiction series. I remember I had one about mummies and I was completely obsessed.

…I was really interested in bog bodies. My mom thought it was a little concerning that instead of Barbie I was obsessed with bog bodies.

Also, my family members didn’t go to university immediately after high school, but they have always been really interested in the past. The History Channel was always on at my house— we’d watch shows like Unearthing Ancient Secrets. I thought it was amazing that you could scan a mummy and find what was the last thing that person ate before they died. I really grew up wanting to do palaeoanthropology.

It wasn’t until the end of high school that I realised hard science wasn’t for me. That’s when I became interested in the cultural aspects of archaeology. I decided I wanted to go to a university where archaeology was in an Arts department. UBC caught my attention right when I graduated high school and I decided to major in cultural anthropology. I spent my entire university career going between whether I wanted to focus on either anthropology or archaeology. I still don’t really have an answer! It’s really been a long-time coming and my interests have shifted throughout my academic career.

LP:       So, you chose UBC specifically because of how archaeology is included under anthropology in an Arts department— that’s really interesting! What other factors were part of that decision?

BP:      Well, I’m from Ontario. A big reason I wanted to go to UBC was because British Columbia is so different from Ontario. I’m from the countryside so I never really spent time in big cities. I was excited to broaden my horizons and find my community within a large city. I wanted to live by the ocean and see the mountains!

LP:       Vancouver is a great city for that. You can see the mountains and the ocean at the same time! What was it like for you once you got to UBC?

BP:      It was overwhelming, but in a good way. I didn’t know anyone in BC, and I had never spent much time outside my town other than the occasional trips. In my first year, when I wasn’t in class, I would travel around Vancouver by bus. I would pick a bus, wander around the city getting lost, and then use Google Maps to find my way back to campus. That’s the nice thing about UBC being a major bus stop — it’s pretty easy to find a bus that takes you to campus. It meant I could have a mini adventure in a day and then come back easily.

LP:       What turned out to be your favourite place in Vancouver after all your bus travels?

BP:      I really like going downtown to Davie Street. I love wandering around that area. The sense of community there is really strong, as is gay culture! That’s just not something I had in Ontario. I lived close enough to town that I went to high school in a semi-urban area, but there wasn’t a big LGBTQ2+ community presence there. Walking around Davie Street is unique, as Pride is a main feature of that neighbourhood. It was fun and new to me! It’s very diverse. Vancouver is very gentrified in many areas, but it’s still a lot more diverse than where I’m from.

This was especially important for me, as a student of anthropology and as someone interested in culture. You can learn about people just by eating with them and interacting in informal contexts. It goes beyond interviewing and reading about culture in a formal ethnographic sense.

LP:       It really is a great city for anthropology students.

BP:      Exactly. Particularly if you’re like me and are interested in food culture. In classes, you learn how food is an important part of culture, then you go and live in a place with as many different foodways as Vancouver. You realise how essential food really is to culture.

LP:       I’m curious how online classes are going for you. I ask because you have a different experience from me — I started during the COVID pandemic with online classes, but you went from taking years of in-person classes to having everything online.

BP:      Many of my classes are ones that focus on human contact and connection, whether in cultural anthropology or in archaeology. The upper level courses in anthropology are mostly small classes where grades are heavily reliant on participation and on conversations you have with classmates. It’s still possible to achieve this through Zoom, but it doesn’t work as organically as when you’re face-to-face. Due to COVID, these classes tend to focus more on lecture material. The professors are trying to compensate for the lack of contact by giving us more materials, but it makes each course feel much more demanding. I can’t blame the professors, because the courses they teach weren’t meant to be online! It is definitely different though. The professors are doing the best they can.

Archaeology is more difficult online, as many of the courses are labs. Usually we’d be handling material from the Lab of Archaeology (LOA) on campus, but that’s all different this year. I haven’t had the opportunity to do a field school yet due to COVID. It’s hard not to have that material connection. The online learning environment is especially hard as someone with ADHD. But everyone is doing the best they can, and hopefully things will improve soon.

BP:      Overall, I’m glad I went to UBC. Like any student, I have complaints about how UBC functions as an institution. Especially as a diligent student of anthropology, I have a lot to say about most university institutions.

BP:      Absolutely. But UBC has been a great place to learn because of the individuals in the department, from both anthropology and archaeology. I’ve worked under and gained insight from a lot of really great people. One of the most important things I’ve learned from mentors at UBC is that you’re not entitled to other’s cultural knowledge just because you’re interested or want to know. That sounds obvious, but I’m ashamed to admit that it took a while for that to really click, especially since I’ve been interested in anthropology for so long.

…It’s made me a better person. Through my education, I can be a better advocate for things such as repatriation and food sovereignty, and I learned that at UBC…

My education on some First Nations issues and in how to communicate these issues to others has been really valuable. I had the opportunity to work as a Work-Learn student in the Laboratory of Archaeology (LOA) under Patricia Ormerod, which is where I learned a lot about repatriation. It was the first time I was really exposed to this issue with museums and I probably would never have learned as much about it at another university.

There’s a focus on community archaeology — working with and for First Nations communities and other descendent communities. I’m glad that I have been able to work with individuals who share these values.

LP:       That is certainly a main strength of our department. What advice do you have for students and individuals looking to study anthropology at UBC?

BP:      Talk to your professors. If they’ve written something you’re interested in, go and ask them questions about it. Engage in class— it can lead to opportunities and relationships in the future that can be extremely enriching and beneficial to you in a lot of ways. For example, I took several classes from one of my favourite professors, Dr. Sabina Magliocco. I just adored everything about those courses. I was engaged in class and went to office hours often. In the end it resulted in a chance for me to attend her ethnographic field school in Sardinia. It was amazing. Then that opportunity led to more. This year, I was offered an undergraduate teaching assistantship for one of her classes.

…You can only benefit from engaging with your professors and TAs…

Make sure to reach out and ask for guidance from your TAs, especially. If you have no direction or no idea what you’re doing, they can probably give you advice. Your TAs probably didn’t know what they wanted to do when they first started as undergraduates. [laughing] They’ve been in the same position as you are now and won’t judge.

Also, if there’s a Student Association, join it. In my first year, I wish I had joined more clubs and socialized more. The relationships I made in second and third year through Student Associations have been really important to me. It allows you to compare experiences with others in your same position. If you’re someone who is coming from a place far away to study, surrounding yourself with a community is essential to your mental health. It’s important to have people that you can talk to everyday and are comfortable around.

Brianna is currently working hard to finish her 5th and final year at UBC. We wish her all the best in the years to come.

Anthropology 495. The Last Class: Anthropology, the Indigenous World, and the State 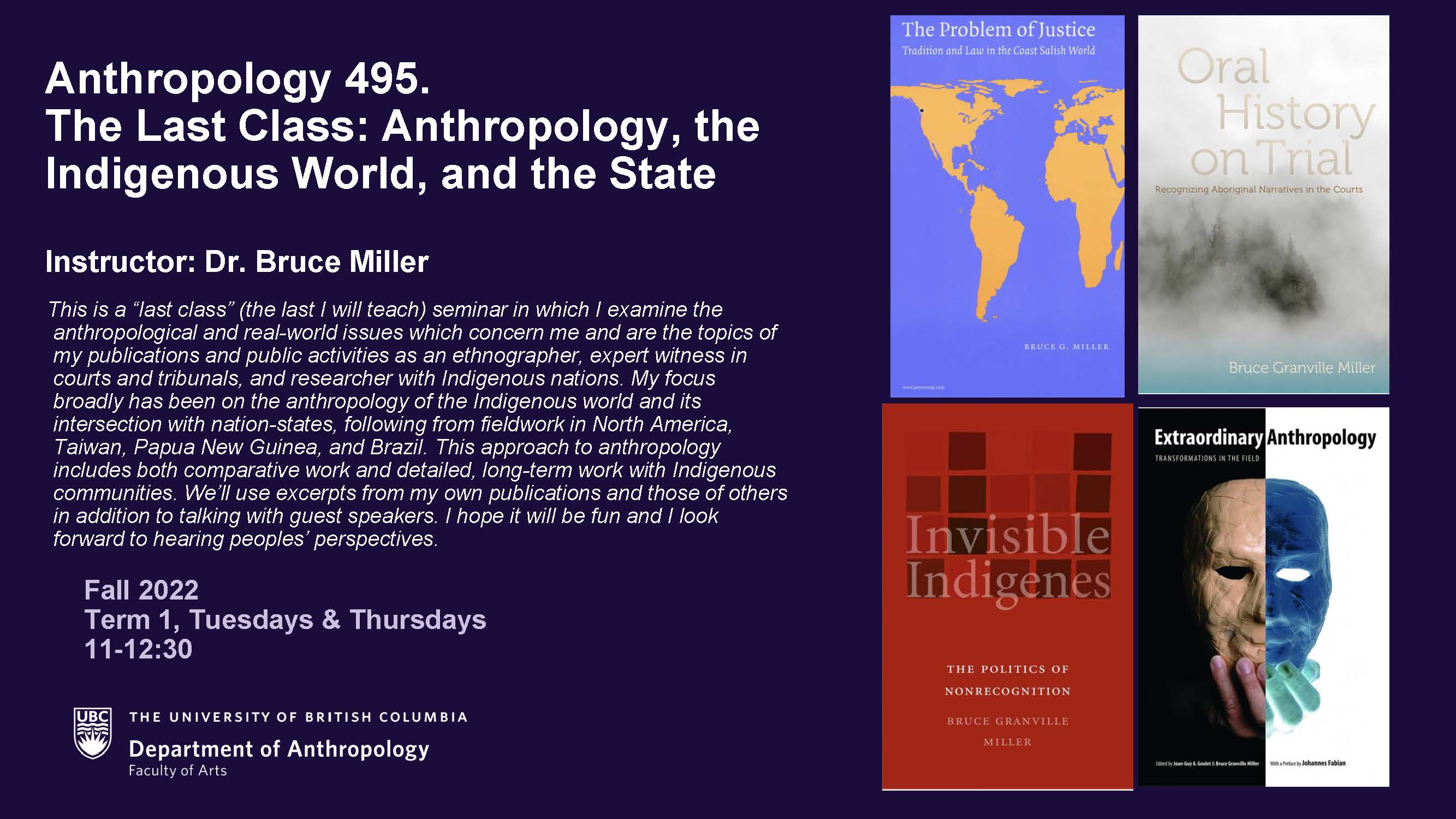 Interview with Dr. Bruce Miller, “Expert Witness: An Inside Look at the Human Rights Tribunal System” 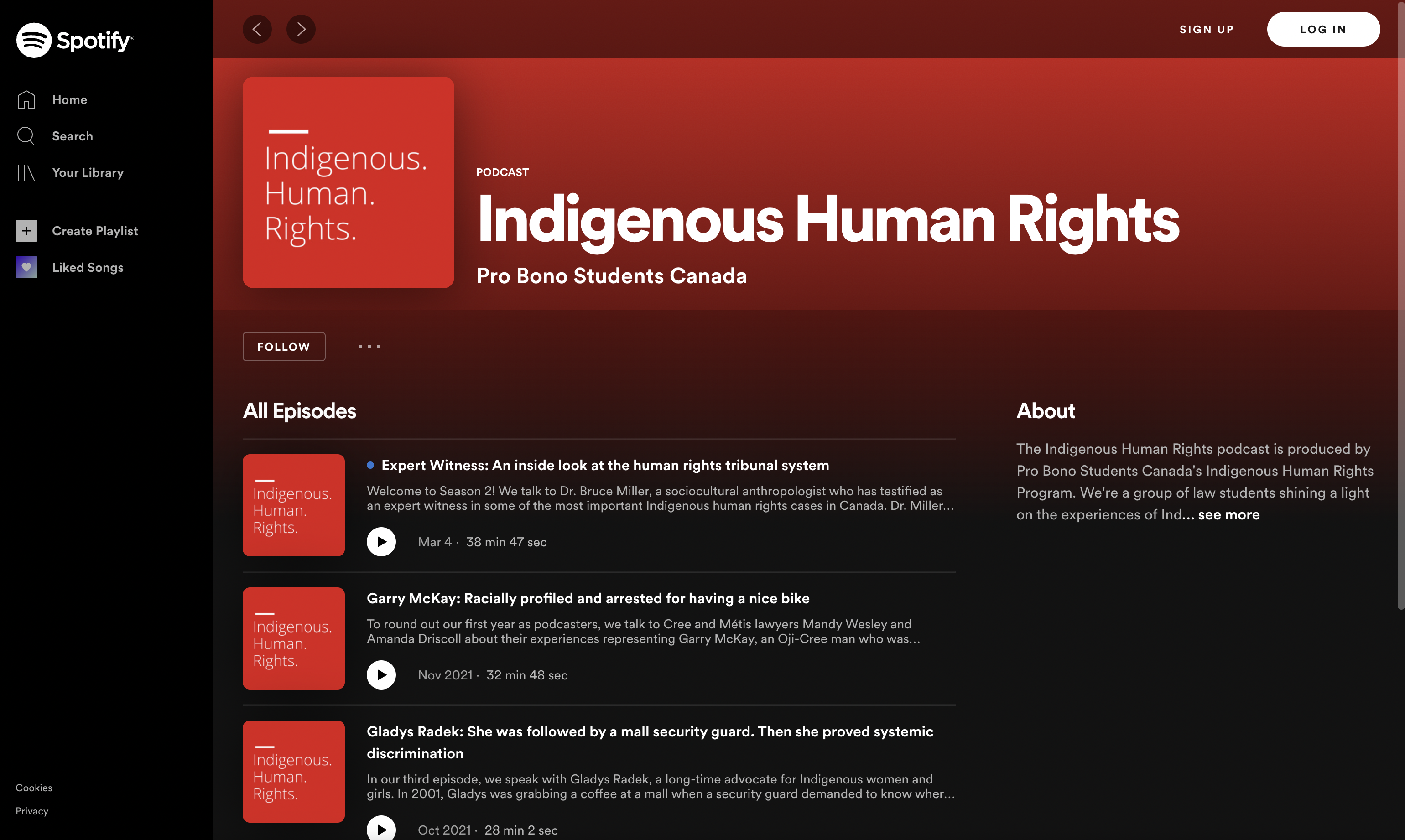